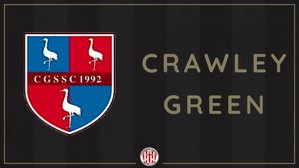 Double Up For Kieron & Ash

Bob Rayner reports from The Brache

Crawley Green fielded a young side against the experienced Risborough Rangers at the Brache, Luton on Saturday and despite the four-nil score-line in favour of the visitors, they didn't disgrace themselves in a game that eventually ran away from them in the final twenty minutes. The home side showed little respect for their opponent's recent record and threatened throughout on the break, despite Rangers having most of the possession. The young Crawley team defended well for much of the game and when in possession, played some neat football. The opening minutes saw Rangers camped in Green's half with Asher Yearwood going close after a good ball from Kieron Schmidt. Green came back with a long range effort, easy for visiting keeper Jack Brooker. Rangers striker, Liam Enver-Marum had the ball in the net on 10 minutes but was adjudged to have handled in the build up. Crawley Green grew in confidence with a 20 yarder flying high over the bar before, soon after, Brooker had to race from his line to clear. A lull in proceedings as Rangers looked frustrated but on 20 minutes the excellent Sean Coles crossed for Yearwood to head wide from close range, where he should have scored. Soon after and Brooker found Wyllie and the winger cut inside, shooting straight at the Crawley keeper. Enver- Marum then tested the keeper with a fierce low shot that was brilliantly tipped around the post for a corner. Rangers then had the first of several appeals for a penalty as Enver-Marum's cross came off the arm of a defender. It looked more like ball to hand and the referee rightly waved away the protests. The well organized home defence was finally breeched in the 35th minute; Coles cross from the right was just too high for Enver-Marum but Schmidt was on hand to head home from close in, despite a brave effort from the keeper. The home side were not done yet and a fine ball outwitted the Rangers defence leaving a one versus one. The Crawley striker lost his nerve however, shooting too soon, leaving Brooker with an easy pick up. Risborough finished the half strongly though, firstly with Yearwood receiving a nice pass from Ben Sturgess, beating his marker and shooting at the keeper and then Enver-Marum cut in from the right to fire just over from the corner of the penalty area.

The second half began much as the first with Rangers enjoying good possession. Eight minutes in, Josh Fox's volley was blocked. From the resultant corner Aaron Jewell should have done better, heading wide from the middle of the goalmouth. Minutes later and a Crawley Green free-kick was headed well wide from distance. At the other end Yearwood looked to be tripped in the Crawley box but the well placed referee was having none of it. 15 minutes into the half and Jewell hit the crossbar with a thumping header following a Rangers corner. As the Crawley rear-guard desperately looked to clear Coles appeared to be fouled, this time looking every bit a penalty, but again waved away. It did not matter however as Rangers doubled their lead in the 60th minute with a sublime move. Some great one touch football in and around the Crawley penalty area finished with a neat back-heel from Enver-Marum into the path of Yearwood. The midfielder composed himself before sliding the ball into the far corner of the Crawley net. Soon after the restart Wyllie dribbled past several Crawley defenders before his shot was blocked, the ball skidding harmlessly through to the keeper. A good build up and neat play by Crawley Green ended with a shot from the edge of the box, straight into the hands of Brooker. Rangers hit back and another Coles cross was tipped away as Sam Pekun threatened. Another counter from Green saw Rangers only half clear before a shot from distance was well held by Brooker. Green weren't finished yet as they pounced on a rare mistake in the Rangers back line, Brooker again coping easily with the low shot. With ten minutes remaining Fox's cross found Coles at the far post. The winger's first time shot was brilliantly blocked by some superb defending, denying him of a certain goal. From the clearance, Jewell made a good tackle, guiding the ball safely for Brooker to clear as the home side would not lay down. With ten minutes to go Rangers began to take control. Schmidt picked out Yearwood who played a nice one two with Pekun only to be denied by a great tackle as he looked to shoot from close range. In the 83rd minute Yearwood grabbed his second and the visitors third, diverting Fox's powerful shot past the wrong footed keeper. Two minutes later and it was four, and what a goal it was! Another Rangers corner was cleared only as far as Schmidt. He took one touch before hitting a left foot screamer from all of 30 yards into the top of the Crawley net, giving the keeper no chance. It was a quiet stunning strike and one that followers of Rangers have witnessed before from the classy midfielder. Rangers looked to add a fifth in the closing minutes with Fox racing through to shoot straight at the keeper and finally, Pekun's back header easily taken by the overworked glovesman.

A good win on the road for Rangers in a game where they didn't have it all their own way. Crawley Green's lowly position belies the efforts of a talented young side who look well coached and hopefully better days lie ahead for them as they gain in experience. A word too for the hospitality and friendliness of the home officials and supporters from Crawley Green, a nice venue to visit (despite no bar!). Back to Rangers; and no doubt Manager, Mark Eaton, will ring the changes for Tuesday night's home Challenge Cup tie versus Buckingham Athletic as he looks to rotate his squad before next Saturday's trip to Baldock Town and another important league fixture. Tuesday's game at the BEP Stadium kicks off at 7.45pm.

Rangers Man of the Match: Sean Coles. The Rangers winger was at his energetic best, tormenting his marker and supplying a raft of great crosses. When not in possession he was a constant thorn in the side of his opponents, scurrying and harassing and tackling. Superb all round performance.